There once was a bird

who had no song.

He would try to sing,

but it felt all wrong.

His heart was broken.

His mother had died.

He felt so lost and 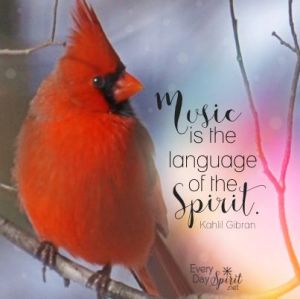 He thought he would

So he tried his best

to bay at the moon.

But it felt all wrong,

and he fell asleep.

When the morning came,

he could only weep.

He refused to sit

in his nest all day.

So he chirped with birds

He finally felt that

On one of his flights,

He met a brown bird,

and he fell in love

with just a word.

They built a nest

and lined it with care.

The bird who thought

he could not sing,

with such great love,

That God sent him praise

from the heavens above.

When your heart is feeling anxious

Found on Facebook Timeline on 7-24-17. Country and Farm Photography. Taken by Carolyn Anderson.

And the world is spinning round,

When your legs keep on shaking

And your lips can’t make a sound,

Stop, whatever you are doing,

Sing a little song of joy.

Give thanks to God, The Father,

For the blessings of your boy.

And there’s nothing you can do,

Sing a song for the warrior

Who lives inside of you.

When you see that souls are hurting

And there’s nothing left to say,

Raise your voice and sing of comfort.

Hold them close for just a day.

Sing of beauty all around you:

How God paints the bluest sky

With the colors of the rainbow

When night is drawing nigh.

Sing a song of joy and laughter.

Sing of blessings from above

Article written by Yu/stan/kema., Dealing with the pain of the changes in America., grief, Losing what I once loved, The things I loved about my Country.

I grew up in the 50’s and 60’s in a country I was proud of, the United States of America. I said the Pledge of Allegiance every day at school. We learned to say all the names of the presidents in the order they served in America, the country in which I was born. We sang the names in a song,  and every time I sang the song, I was proud of them, the men who represented our Nation. They were about service, a deep commitment to our laws, a respect for the Constitution of the United States of America.

They weren’t perfect men but they were men who put their Country first, above their own selfish interests and party. They were dedicated to making the United States a place of opportunity, freedom, respect for others, helping those who needed a helping hand. They believed that in serving the American People, facts were important, truth was necessary, and what was right must prevail. They believed a man’s word was his bond, that honor was important, and most of all, they believed one should never betray the Trust of the American People.

These men knew that the right to vote was sacred and no one should lie, cheat, or steal, manipulate the votes in an American election. Falsehoods had no place in the Government. They trusted that the three main branches of the United States Government would see that the people’s voices were heard and their needs would be addressed. That those three branches would work together as intended to find solutions for all the people. They believed the United States Government would serve the American people with integrity, compassion, and respect. They also believed in protecting the American People from harm. These men could be trusted to do the right thing. I was proud of my country back then, proud of the men in congress, proud of the Presidents as the years went by.

In the year 2016, changes occurred in the United States. The Nation started to slide down hill and the years that followed were filled with laws being broken, elections manipulated, other countries interfering with American elections, and candidates for office being slandered by political parties who could no longer be civil with one another. Corruption was present in the highest offices of our Government.

The American People were being lied to, and others were being discriminated against on a daily basis. Fear was used to confuse and distract voters and keep political party members in line to please the leader. The American Press was being attacked relentlessly in order to discourage them from sharing honest information. The more immediate issues of gun violence, climate change problems, and rolled back safety regulations that prevented pollution were being  set aside so the political party in power could raise more money for their campaigns, increase their political power, and  win regardless of the cost to  the people they were sworn to protect and be accountable to.

Such changes have been hard for me to see and  live through. My moral values are being challenged constantly and the need to act becomes more pressing, for I want to live in a democracy and have freedom and justice for all. I want to feel safe in America and I want others to feel safe too. I grieve for what I once knew and for what my children may never have unless brave men of honor, compassion, and integrity come forward to work together to change our world into a better place.

All it takes is a little bit of kindness

spread through out the world,

and a little bit of patriotism

when you see the flag unfurled.

All it takes is a little respect

toward every one you meet,

and a word of encouragement

to those who have known defeat.

All it takes is an act of compassion

when you see a wounded heart,

and some time to create a bond

right from the very start.

All it takes is being positive

when the world knocks you down,

and the courage to get up

from the hard, cold ground.

All it takes is each of us reaching

a hand to those in need

to make this world a better place

where all of us can succeed.

For by taking the time to respect each other

and wanting the best for all,

we will come together to make a world

without building a wall.