When the world becomes too heavy

To carry on your back, my child,

Take some time to leave behind

All your worries in the Wild.

Learn to travel in the forest.

Name the trees that you see.

Lie beneath them and study

Bark and leaves from every tree.

Kneel and study moss and lichens.

It’s a place where fairies play.

As you walk along your way.

While the light fades to darkness,

Build a fire in a safe place.

Warm your fingers by the flames.

Thank God for this sacred space.

Learn to gaze upon the night sky.

Watch the stars blink and shine. 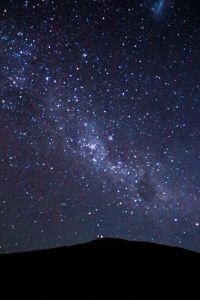 All your troubles will seem small,

As you sleep beneath the Pine.

In times of trouble, we are given

Nature has the power to heal us

And teach us so much more.

of my life’s fabric.

are found when I

for what is good.

are a part of

When the pain hurts too much,

Let go when day is done.

Rise up on wings of fairy dust

And dance among the stars.

And wave good-bye to Mars.

Lay back against the crescent moon,

And God will rock you to sleep,

As the angels sing you a lullaby

That would make a grown man weep.

The world can be a scary place

When you are small and alone.

To a home you can call your own.

Don’t let go of the Hope inside.

Reach out with your tiny hand.

Trust in others to see you through

To find peace in the Promised Land.

In a distant time and place.

I’ll look you up when I leave this world

And travel through endless space.

If you should die before I do,

Meet me at the pearly gate.

I don’t want to miss time with you.

We’ve a lot to celebrate.

And laugh ’til the sun goes down.

In a field of beautiful  flowers.

And dance in the Spring showers.

We’ll  pass under the towering trees,

And listen to the birds that sing.

They will create a symphony

That will make the forest ring. 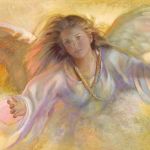 When I am given my pair of wings,

You and I will fly

To the nearest star and back again,

Under a moon-lit sky.

When you are finally done for the night,

You’ll take out your harp and play,

A tune to match with the song I’ll write.

It’s another way of  to pray.

So don’t you be sorry if I go first,

And make it there before you.

I’ll save a very special place,

And tell God you are coming too.

"The Little Star.", Angels picked him., Christ the King., Christmas., He shined his light on Jesus., New Year, Pinterest photo- David Bowman, Pinterest photo- Stephen Hayward., poetry by Yu/stan/kema, Thinking small., Wanting to be as good as others.

“This is dedicated to a teacher who heals.”

Long ago a little star was born,

And for the longest time, he felt forlorn.

He saw that the other stars could shine.

He wanted so to be as fine.

But he was small and thought,

What he had to give was not,

As wondrous as his brothers.

He was jealous of the others.

Until one night there came,

Angels who said his name,

They took him to a stable

And asked if he was able,

To twinkle in the sky,

And cast a light from on high

Into the eyes of a baby boy,

And bring forth a laugh of joy.

They said He was the new-born King,

And salvation He would bring

To a world who needed Him

In the hearts of everyone

Who lived beneath the earth’s sun.

So the little star shined bright,

As he rose in the night,

And he opened his heart wide,

And gave his all with so much pride.

He caused the baby boy to laugh,

And he created a bright path,

So three kings could find a way,

To pay homage to Christ that day.